The twins and I are currently producing the new The Secret Sisters album! This is our first production project that isn’t our own. PLEASE read my letter below to understand how you can be a part of changing The Secret Sisters story and helping us make this album! It’s revolutionary.

Who said it? No no – it wasn’t a bandit on the run from the law fearing the dreaded appliance repossession… it was Patsy Cline not long before she left us in 1963, why is it important? Because Patsy Cline had a slew of number one hits under her belt while she frequently pondered the real possibility of repossession of her prized possession… her refrigerator.

This is a problem because at the time the music business (and most businesses) had created for itself and environment where what women created became the property of the institution and the men who controlled it. 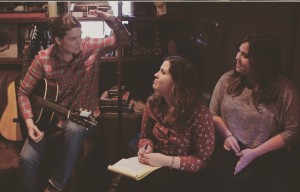 By default the uncomfortable truth about our beloved industry of art and honesty… is that we are what we create, making women themselves actually the property.

What a rough road for our heroes! Glad to know it’s in the past? I think deep down we know that quietly, it still happens. We are seeing blatant misogyny constantly making music headlines and I am not happy with it.

The bumps and bruises that The Secret Sisters have earned on the road are entirely their own. Their life and their music are their story to tell. Young women in their 20′s, they belong to no one

regardless of their gender. At some point they said we aren’t owned… and they grew up.

You and I “their fans” might not have been able to save them from the pain and humiliation of lawsuits and bankruptcy (a small price to pay for their freedom) But by contributing to this pledge campaign and the making of this album we’re standing up and saying – Boys you can’t take their refrigerator now!