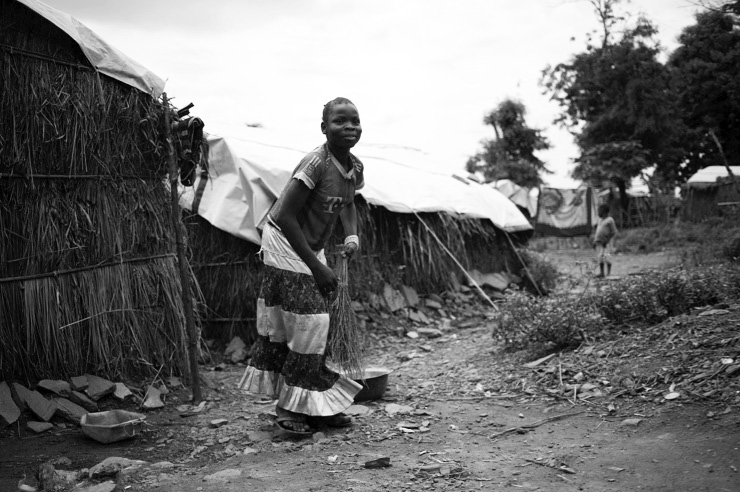 "I lived in a nearby village with my family, but we fled here because of the war" - Beatrice

Across the Central African Republic (CAR) there are displacement camps full of people who have fled the violence which has befallen this country. The camps pop-up in urban areas or dot the countryside. They are a monument to the constant uncertainty of life in a troubled land.

Children in Conflict supports child-friendly spaces at many of these camps. These are places where children come to learn, play and hopefully forget about the often-distressing experiences which took them from their homes

Beatrice* is one of those who regularly attend the space. She is a bright and welcoming 14-year-old who has seen more of the horrors of war than any child should.

“I lived in a nearby village with my family, but we fled here because of the war,” she says.

“A militia came and burned our village. They killed my elder brother.

“While we were fleeing, my father was shot dead. I ran with my mother until we got here. We have been here ever since.”

Background to the conflict in the Central African Republic

Armed conflict broke out in the CAR in 2013 when rebel factions captured the capital and deposed President Francois Bozize. Since then, sectarian clashes have continued to displace communities throughout the troubled nation.

Since September 2016 the situation in the CAR has significantly declined.

Some 60% of the country is still under the control of armed groups, more than 25% of the population are either internally displaced or have sought safety in border countries.

How Children in Conflict helps Beatrice

Beatrice believes that the Child Friendly Space in the camp is important for the children who attend.

“I come because there are things to do, to dance and to play. Children here have wounds because their fathers and mothers were killed.

“The staff teach us to forget our problems and forget everything we have seen.”

Life in the camp

Despite the best efforts of our country team, life in the camp is difficult. Families live in small, makeshift huts. Children pick their way across rocky ground or stand around in groups waiting for something to come along to relieve the boredom.

“I do not like this camp,” Beatrice confesses. “If we go home and don’t find something to eat there, we just have a bath. We prepare some porridge to eat and then sleep.

“Before, when the country was still good, we had our farm and we took care of it.

“But now we have nothing.

“It makes me very sad to think about my father and my future. But when I come here, I forget for a while.”

Beatrice often leads other children in dancing and singing at the space – making the most of the time she has there.

“I am happy here now as I have my friends. I would be very happy if the war ended and I could return to my village.”

*Beatrice’s name has been changed to protect her identity

Beatrice lives with her mother with several other relatives in neighboring huts. She spends some of her time doing household chores such as washing dishes – sometimes under the watchful eye of her puppy.

HELP keep child friendly spaces available to the children like Beatrice - CONTRIBUTE to The Story Campaign.