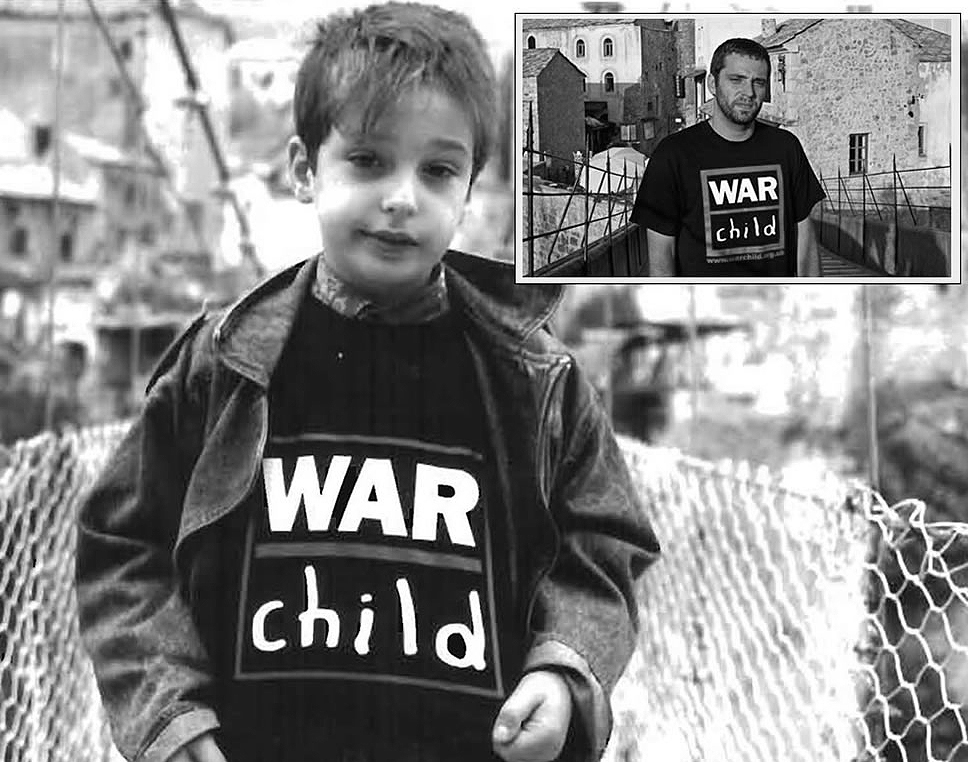 Seven year old Jasmin Elezovic stands beside the remains of Mostar’s iconic Ottoman bridge. It had proudly stood for 427 years, but in November 1993 it was destroyed by Croatian artillery fire in a matter of minutes.

This is where our story began. Jasmin was to become one of the original ‘War Children’.

Jasmin lived in east Mostar with his parents Ermin and Alma whilst it was besieged by Croat forces for nine horrific months in 1993. The constant sniper and artillery fire kept children like Jasmin imprisoned in their own homes for months on end, without the chance to play, or to meet with friends.

When the ceasefire finally arrived in February 1994, so did War Child's mobile bakery and, later, their music therapy projects. Jasmin remembers: “Suddenly there were all these foreigners, bringing a new world, a new language, and music – old stuff, their music. I loved it, and the bakery, where I made a heart-shaped loaf for my mum.”

He remembers playing the drums in an early workshop with Brian Eno and Nigel Osborne, speaking English and beginning to play the guitar.

His father recalls the impact the bakery had:

“I thought: ‘At last!’ I started spending every hour I could away from the frontline baking bread. We had been in hell for years, and deepest hell for nine months, but were now baking 4,000 to 5,000 loaves a day. It was also a chance to talk to people about music, football and stuff, not just war and hate.”

“He used to come in off the line at 2am and go straight to the bakery,” remembers Ermin's wife, Alma, “and then at five, go around to deliver bread to those who needed it most. Then back to the front. He never slept, but even so, in a way, the bakery saved him, from himself I mean, after the terrible things he had seen. It saved our stomachs, of course, but it saved Ermin in another way too.”

Fifteen years later War Child went back with journalist Ed Vulliamy to visit Jasmin who's now a talented guitar player. He’s trying to carry on what War Child began – building bridges of his own.

He set up a school council at the only non-segregated secondary school in Mostar, organizing field trips that brought together pupils from all three communities – on garbage clean-up and bench-painting projects; civic housekeeping of the city their parents once peacefully shared. “That,”Jasmin insists, “is the way it has to be, in the end.”

HELP young adults like Jasmin build bridges - CONTRIBUTE to The Story Campaign below.