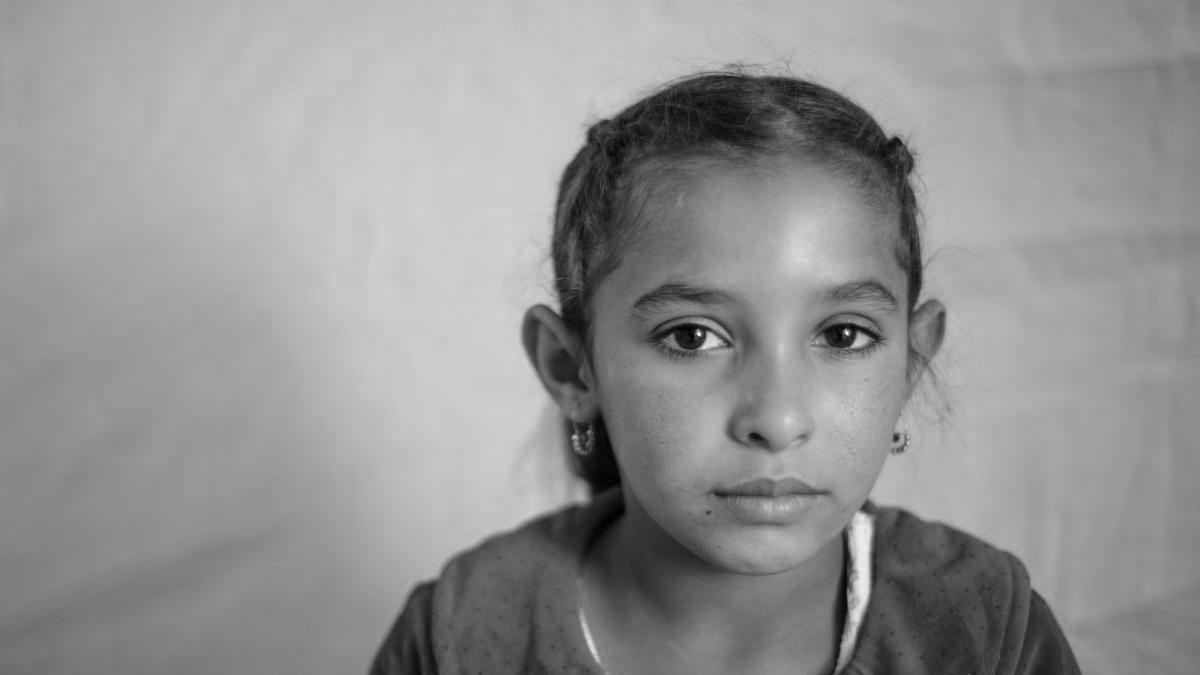 "There are no words to name what we have been through."

Sumaya is 8 years old. She now lives with her family in a camp for people displaced by the fighting in Mosul.

Her mother Tamara tells us the story of what has happened to her family since ISIS took control of their village.

"We had a good life before, we had a house, cars, money. But now we are on the ground, we have nothing. I don't know what the name of this story would be, I think crisis".

"We had a farm and my husband worked for a small gas company. We had started building a new house."

Sumaya hardly leaves her mother's side, a sign that she is still traumatized by the bombing and fighting in her village.

"Then ISIS came and we had to leave to the next village. There was no fighting there. Geographically it wasn't high up like our village, it was lower down. We thought nothing would happen there. My husband's friend gave us money and a truck. He and my husband jointly owned the farm and the small company my husband also worked for. But our 80 sheep and the company were taken by ISIS. They captured my husband and held him for 8 days.

We had no information about where they were. According to ISIS rules, they should cut their hands, because they accused my husband of stealing the sheep. I was worried that it would not just be their hands, they would cut off their heads and kill them.

I wasn't able to eat or sleep. I was alone because I sent my daughters to a village where it was a safer area to stay with their aunt. Most of our neighbours had already left but we had to stay for our business.

When my husband was released, he was so scared. He witnessed how tough ISIS rules were. Women had to cover fully, with the black cover, and the men had to grow a beard. If I went out and if I showed my face, they would not talk to me. They would take my husband and make him pay 50 Iraqi dinar or they would beat him.

We moved around a lot, from village to village. The fighting started to come closer and one day last November, a missile fell in our garden. From that moment, I spoke to my husband and told him that we had to move, I couldn't be there anymore. There were so many people that were injured.

Before ISIS came, the children were going to school and helping their father. Each Friday they would go to the park. Before ISIS came, Sumaya was just old enough to start attending school, but then ISIS came and she never went.

In the village there was no school because there were no teachers. In Mosul there was school but people stopped sending their children to it. The reason was because they were teaching the children how to use guns, how to fight. Even at 6 years old, for example, they will take the child and ask them if they like the Islamic State. It was forbidden to say 'Daesh', they would kill people for saying it. So they had to say 'We like the Islamic State'.

There was no teaching, they were teaching the children bad things, even the Quran was taught wrong. We are Muslim people so we know what is written in our Quran, but they were changing it to what they wanted, so we stopped sending them to the school. I was worried about Sumaya’s education. She was not able to go and play. And I was scared, so I was keeping her at home. Before ISIS it was easier for Sumaya to play, and I would stay by the door watching her.

But Sumaya has a lot of problems now. She is scared. She saw so many things which are not good for children to see. Even up to now she's scared and she has to be close to me. Otherwise she won't sleep at the night. And she always remembers and talks about things that have happened. Even if you ask her to do simple things outside the tent, she is scared, she refuses.

Before ISIS came to the village, she was always trying to go out and visit her grandfather's house. But once she heard about the bombing and fighting, she got scared. I am worried, because as a child she did not see anything nice in her life. All of us, not only Sumaya, when we heard the bombing, we would all stop eating, we could not eat."

Sumaya's father is still separated from the family.

"Every night she asks me 'When is my dad coming back?' So every day I tell her tomorrow. She also likes television, but we don't have one. Two families brought a television to the camp and she wants to go watch, but their tents are small so I don't want to disturb them."

War Child is helping Sumaya to rebuild her childhood. Their Temporary Learning Space is a sanctuary for children, away from the chaos of camp life. It gives them a chance to play with other children and catch up on missed schooling.

Sumaya says, "In the morning, I go to school. And in the afternoon I go to the War Child Temporary Learning Space. And after that I come back home and I start to study.

HELP protect and educate girls like Sumaya - CONTRIBUTE to The Story Campaign.